Kung Fu Nuns in Nepal boost their health in the fight for women's rights
By Sandee LaMotte, CNN 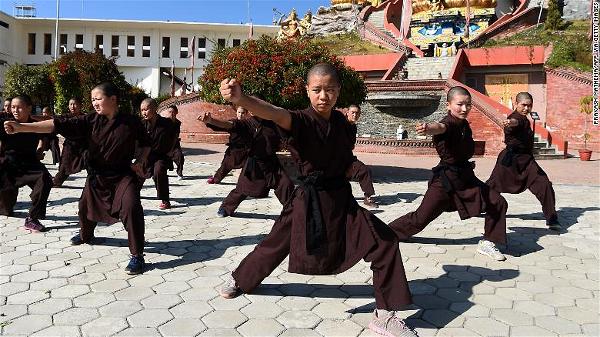 Nepali Buddhist nuns practise kung fu at the Amitabha Drukpa Nunnery on the outskirts of Kathmandu.

(CNN)  Swords swirl around their bodies, coming perilously close to piercing flesh. Blades flashing in the morning sun, the young women twirl, cartwheel and then kick in unison, finishing their graceful movements in a centuries old kung fu fighting stance.

Dressed alike with matching shaved heads, the women and girls finish their daily exercise and move on to their other duties as part of the Kung Fu Nuns of the Himalayas, a name they have proudly adopted.
Jigme Yangchen Ghamo has lived at the Druk Amitabha Mountain Nunnery perched high in the mountains outside Kathmandu since she was 10 years old.
"We are the only nunnery in all of the Himalayas doing deadly martial arts," Ghamo told CNN's Great Big Story in June. "This is a lifelong vow that I made to the Drukpa Order, and I am very proud of my practice."

The Drukpa Order is a branch of Himalayan Buddhism, a faith which traditionally considers women second-class citizens. According to Buddhist narratives, a woman cannot achieve spiritual enlightenment unless she is reborn as a man.
"The idea was that as long as the nuns cook and clean for the monks, they can come back as a monk in their next lifetime and then become enlightened," said Carrie Lee, the former president of Live to Love, a non-governmental organization that works closely with the nunnery to supply aid to the region.
According to Lee, discrimination toward women is a way of life in Nepal and surrounding nations. Girls are considered a burden and are frequently aborted; if they live, they have limited access to healthcare or education. They are often sold off to traffickers or marry young; wife beating and other types of spousal violence is common.
His Holiness Gyalwang Drukpa, the spiritual leader of the Drukpa lineage, says as a child he believed the Buddhist beliefs about women to be misguided. In the early 2000s he began to promote the nuns to leadership positions.
It wasn't always well received. Local traditionalists called the action "blasphemous," Lee said, "and then they started harassing the nuns and assaulting them."
To teach the nuns self-defense, Drukpa hired a kung fu teacher in 2008. But His Holiness also hoped the training would improve the nun's confidence and self-esteem.

Source: CNN.com
"I consider the kung fu art, martial art, an education," he told actress Susan Sarandon in a 2014 interview. "I'm very proud of the nuns.
"I have been breaking through all these barriers," he added. "Whatever the Buddhist people say I don't mind and I don't care."
PreviousNext
Print
Send comment
ẨM THỰC