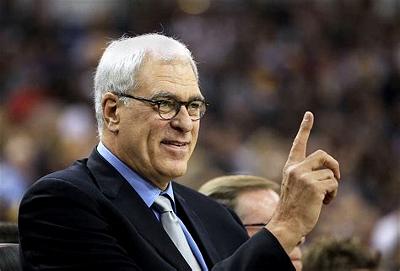 Buddhism and Basketball? It Works for Phil Jackson
By Taresa Watanabe

Blocks away from the triumphant Los Angeles Lakers victory parade Wednesday, the Buddhist priest pondered the win, the way and the sound of thousands of hands clapping.

Yes, said the Rev. Noriaki Ito, he expected the Lakers would ride to a world championship the moment he heard Coach Phil Jackson was coming to town. He had followed him for years, knew he practiced Zen meditation and knew he incorporated those concepts into his coaching.

Jackson, of course, practices more than Zen. The son of fundamentalist Christian preachers, he has told reporters he also believes in prayer, miracles and the laying on of hands. He employs yoga and believes in the power of spiritual symbolism--one reason he used to display a Native American headdress with eagle feathers in the Chicago Bulls team room.

But to Ito, Jackson embodies the perfect blend of the priest’s two great loves: Buddhism and basketball. The Buddhist minister has played the game since the age of 9 in youth leagues, and he became a true-blue Lakers fan the year after that--even before they were televised, even before they were winning (despite the best efforts of Jerry West and Elgin Baylor).

“I liken Phil Jackson to a true martial arts master who realizes that the spiritual, mental and physical have to be integrated into one,” said Ito, the 51-year-old head minister at Higashi Honganji Buddhist Temple in Little Tokyo. “I believe that’s what brought the Lakers over the hump.”

Ito and other Buddhist priests around the Southland say they recognized a Buddhist imprint on the Lakers game almost immediately:

The Middle Path. The whole time the Lakers were riding high and sinking low during the playoffs, even when they got blown out by 33 points in the fifth game in Indianapolis, Jackson never lost his cool, Ito said.

“The Buddhist thought in following the middle path is to take life’s ups and downs in a balanced and centered way,” said the Rev. Tom Kurai of the Sozenji Buddhist Temple in Montebello.

Interdependence of Life. Using the Buddhist idea of selflessness and interdependence, Jackson has managed to meld together a team of sometimes self-absorbed and competitive athletes. Rinban George T. Matsubashi of Los Angeles Hompa Hongwanji Buddhist Temple in Little Tokyo notes that star center Shaquille O’Neal has significantly increased his assists. Ito sees fewer temper tantrums and more acceptance by bench players of their valuable roles in supporting the team overall.

“I notice more of a focus on denying individual egos for the benefit of the team,” Ito said. “In Buddhism, suppressing the ego is central to any kind of awakening.”

Go With the Flow. Ito said he sees Buddhist principles in Jackson’s patented triangle offense of players constantly flowing into formation. Even his tendency not to call timeouts if things aren’t going well, to let the players work it out themselves, seems to be a reflection of this principle, the priests say.

“The Buddha expects us to be like a body of water flowing downhill. When you reach a tree or boulder, you go around it rather than try to use force against it,” Ito said.

Ito also thinks Jackson has helped players mature by looking inward and knowing themselves better, including their limitations. And the coach seems to have helped them grasp a key Buddhist principle that the process is more important than the result.

“Somehow, you feel with Jackson that the ultimate goal isn’t winning, but how well the team grows together,” Ito said.

As the winning coach with 11 NBA titles under his belt, Phil Jackson is considered one of the best basketball coaches the game has seen. As part of his legendary coaching, Jackson used some rather uncommon tactics to help create these championship teams — tactics he shared with Oprah during an interview for “Super Soul Sunday.”

The key concept behind Jackson‘s coaching methods, he says, was the idea of “one breath, one mind,” a Zen principle he approached carefully with the Chicago Bulls. “I approached it with mindfulness,” he tells Oprah in the above video. “As much as we pump iron and we run to build our strength up, we need to build our mental strength up... so we can focus... so we can be in concert with one another.”

One way Jackson had his team practice mindfulness was through meditation. Oprah asks, “So, you would literally have the guys sit in stillness?”

“That’s right,” Jackson answers. “Taught them how to hold their hands, where their shoulders had to be, the whole process of being in an upright situation so you’re not slouched... and they bought into it.”

In addition to meditation, Oprah asks Jackson about another one of his mindful coaching tactics. “Did you not also have them play in the dark at one point?” she inquires.

“It wasn’t totally dark, but I wanted them to get the idea of being able to do things that are just out of the ordinary, like silence day — have a day of just silence,” Jackson says. “There’s a lot of chatter in basketball and, rightfully, you want players to be talking to each other... But sometimes in practice, it gets too verbose... so I tried to take things out of the ordinary and make them special so they’d understand the difference.”

In the video, Jackson also explains two other mind-body practices that didn’t quite work with his teams and reveals how both the Chicago Bulls and Los Angeles Lakers responded to his relatively uncommon coaching tactics.